Airplane or bullet train, to Hokkaido

When you travel, which do you prefer, airline services or Shinkansen bullet trains?

Suppose you come to Hokkaido.  You might choose airline services.  There is a phenomenon in which travelers tend to shift from airline services to Shinkansen bullet trains when travel time is under four hours.

One drawback to the Hokkaido Shinkansen for passengers from Tokyo is travel time.  The 4-hour, 2-minute ride to Shin-Hakodate-Hokuto fails to break the four-hour wall, under which rail competes favorably against air travel.

Hokkaido Shinkansen has been struggling to break the psychological four-hour barrier between Tokyo and Shin-hakodate-Hokuto.  One problem is the Seikan Tunnel.  Shinkansen and freight trains pass by each other in the Seikan Tunnel which connects Aomori Prefecture and Hokkaido.  In order to prevent accidents such as a load collapse, Shinkansen trains run at a speed of 140 kph in the tunnel.

In September, test runs were carried out at 160 kph for three days and the safety of the Seikan Tunnel was confirmed.  There is no problem if the speed of the shinkansen is raised.

The shortest travel time between Tokyo and Shin-Hakodate-Hokuto will be reduced by three minutes as early as this fiscal year.  It is currently four hours and two ninutes.

The travel time of less than four hours will break the four hour barrier which is a key mark to winning a share of the competition form airline services.

The Hokkaido tourism season begins with Golden Week holidays every year.  Why don’t you enjoy the beautiful scenery from a Shinkansen bullet train window. 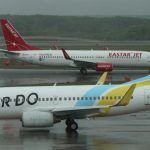